When it comes to the blues today, there are a handful of guiding lights to make sure the music stays true to its powerful source. The sound of pleasure and pain that first sparked musicians to create such a sound is a force that can never be underestimated. The mojo has to be there. For Jimmie Vaughan, he's dedicated his life to making sure the blues not only stays alive, but remains full of life and an inspiration to all who listen. It's a spirit he holds close to him, and for over 50 years of holding the blues close inside him, Vaughan isn't about to stop now. "Playing what you feel has always been my main goal," Vaughan says. Considering the Texas guitarist and singer has had the kind of career that makes him a living legacy, those are no idle words. 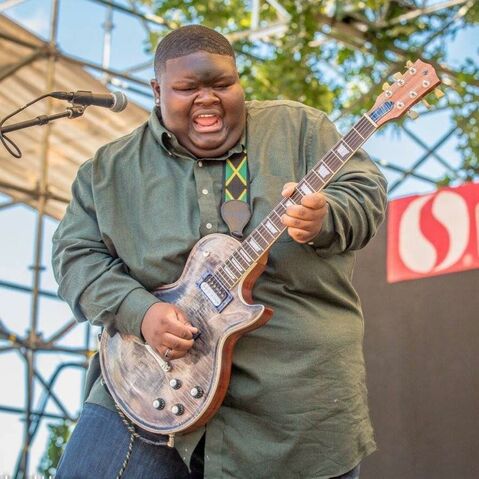 Once a generation, a blues artist comes along who not only reminds mainstream audiences how deeply satisfying and emotionally moving the best blues music can be, but shakes the genre to its core. With both eyes on the future and the blues in his blood, 20-year-old guitarist, vocalist and songwriter Christone “Kingfish” Ingram is set to take the music world by storm with the May 2019 release of his debut album, KINGFISH. Sprung from the same earth as so many of the Delta blues masters, Kingfish comes bursting out of Clarksdale, Mississippi, just ten miles from the legendary crossroads of Highways 61 and 49. A student of the Delta’s musical history, he is acutely aware of the musicians and the music that emerged from his corner of the world. “I do think I have an old soul, that I’ve been here before,” he says. “I’m moving forward with one foot in the past.”

"Is Christone "Kingfish" Ingram the future of the blues? The blues savior is one of the most exciting young guitarists in years, with a sound that encompasses B.B. King, Jimi Hendrix & Prince." --Rolling Stone

Born and raised in Mississippi, Zac Harmon got an early start on his music career when he played guitar for singer and noted harp blower Sam Myers. That led to more work with touring blues and R&B artists including Dorothy Moore and Z.Z. Hill. But eventually Harmon fell under the spell of the bright lights, big city, leading to a move to Los Angeles, where he wrote songs for a variety of artists as well as working on films and television shows. At one point, he was a staff writer for Michael Jackson’s team. He received a Grammy nomination for his writing and production with the reggae band Black Uhuru.

After the turn of the century, Harmon felt his roots calling him home, so he made the decision to play blues music. That move paid immediate dividends when he was named the top blues band at the 2004 International Blues Challenge, the annual event in Memphis sponsored by the Blues Foundation. More recognition came when his 2005 release, The Blues For Zacariah, won the Blues Music Award in the Best New Artist Debut category.

2020 International Blues Challenge Winners (representing the Ottawa Blues Society), HOROJO Trio is a soul rockin’ rhythm & blues act that features drummer Jamie Holmes, singer/keyboardist Jeff Rogers, and guitarist/singer JW-Jones, who was named the year's Best Guitarist at the IBC.  Jeff is known as one of the hardest working artists in the nation’s capital clocking over 250 shows per year. The Ottawa Citizen says “his voice practically bowls you over with intensity, as sweet, rich and gooey as molasses in a heatwave”, while Nick Krewen (Globe & Mail, Grammy.com, Billboard) calls JUNO nominee JW-Jones “a frequent resident of Billboard’s Top 10 Blues charts and roots radio favourite”. Jamie is one of the most versatile drummers in the country and has toured throughout North-America and Europe and recorded in Nashville with Grammy winning producer Tom Hambridge.

Chris’s musical background includes duties as lead singer and front man for rock and roll hall of famer and Grammy award winner Levon Helm’s band, The Barnburners. During the 6 years that Chris and Levon played together they toured across the US and Canada lighting up stages everywhere they went. Chris has appeared on stage with: Legendary Rolling Stones sideman Bobby Keys, The Fabulous Thunderbirds, Jimmy Vivino, Jeff Healy, Dan Akroyd, Albert Lee, Dave Edmunds, Dave Maxwell and the great James Cotton to name just a few. Chris has also recorded with Bill Perry and Hubert Sumlin, among others. 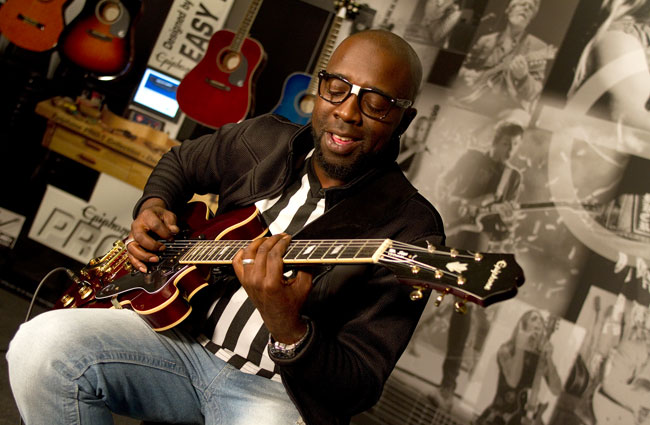 Mr. Sipp, “The Mississippi Blues Child,” is the alter ego of gospel guitarist Castro Coleman. One of the hottest new names in the blues world, Mr. Sipp made his debut on Malaco Records in 2015. Castro Coleman was born in McComb, Mississippi, on August 25, 1976, and started playing guitar as a young child. Coleman recalls, “I was born a musician. Music was in my life from the moment I arrived; both of my parents were in singing groups and played some type of instrument. It’s just a natural part of me.” Early on he played in several gospel groups and later took a role behind the scenes playing on more than 50 gospel recordings while also learning the role of producer and honing his skills as a songwriter and entertainer.
Never one to be pigeonholed musically, in 2013 Mr. Sipp was born and launched himself into the blues world. Sporting a look anchored by thick, black glasses with a piece of tape around the nose brace, this performer can deliver the goods, and his live shows were immediately hailed as “passionate and energetic.” In 2014 he won the top prize at the annual International Blues Challenge held by the Blues Foundation in Memphis. He also won the 2014 Gibson Best Guitarist Award, the 2014 Jus’ Blues Foundation’s Bobby Rush Entertainer’s Award and the 2015 Jackson Music Awards Blues Artist of the Year.

Mr. Sipp’s popularity has exploded, making him one of the most popular acts on the blues scene today. He is touring heavily including recent performances at the Chicago Blues Festival, the Crescent City Blues and BBQ Festival and the Legendary Rhythm and Blues Cruise, as well as tours of Europe, Brazil and even China.

There is no question that Angel Forrest is one of the most powerful singers on the contemporary blues scene today. The strength of her performances, her distinctive voice and fiery personality has allowed her to conquer the hearts of thousands of fans around the world.

In 1988, Angel Forrest began a musical career which would span over three decades and counting. The Montreal artist was named Female Vocalist of the Year six straight times by the Toronto Blues Society between 2013 and 2018. Never limited to blues, the 2018 Memphis International Blues Challenge Finalist sings in the whole country, blues and rock spectrum.

Doug MacLeod is known for his superb songwriting, guitar wizardry, warm soulful vocals, wit and unforgettable live performances. At the heart of a Doug MacLeod performance is his knack for storytelling, bringing characters-from the faceless to the legendary-to strikingly real life. 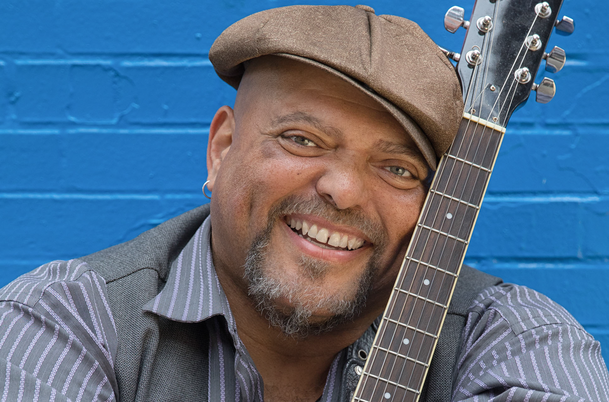 For more than 25 years Kevin Burt has been electrifying audiences throughout the Midwest dispelling the myth that true blues has no roots in Iowa. His soul-inspired presentation is unique which consistently get him compared to a range of artists like Bill Withers and Aaron Neville, with the ability to build an audience rapport that has been compared to B.B. King.

Kevin is a self-taught musician (vocals, harmonica, and guitar) whose smooth, warm vocal presentation sets a mood of relaxed exhilaration, with a welcome mixture of serious music and infectious humor audiences of all ages seem to enjoy. His voice and presence are powerful. His unique delivery ranges from the sweetest, fullest, juiciest come-on to the most playful growl.

Terrance Simien and the Zydeco Experience

Grammy-winner Terrance Simien takes his audiences on a multicultural tour of the world inspired the many countries he’s visited on tour which have informed his musical language. He creates a hypnotic blend of New Orleans funk-reggae-flavored-world-blues-American zydeco roots music that beckons you to your feet and into the groove. Leading his Zydeco Experience band, Simien has become one of the most respected and accomplished artists in American roots music today. He and his band mates have performed over 7000 concerts, toured millions of miles to over 45 countries during their eventful career.

Albert Castiglia has been making his living as a bluesman for 20 years, coming to prominence as lead guitarist for the legendary Junior Wells. He later went on to work with singer Sandra Hall. Never content to allow himself to be confined to any particular category, he embarked on a solo career that’s yielded eight critically acclaimed album and consist kudos for his exceptional instrumental prowess, his searing vocals, and live performances that have dazzled audiences from coast to coast. It’s little wonder that Miami’s New Times lauded him as South Florida’s “Best Blues Guitarist” or that USA Today was inspired to remark “It's a revelation to discover the thrilling retro-electric blues from this astonishing young guitarist.”

Shemekia Copeland never holds back. Her instantly recognizable voice—capable of being sultry, assertive and roaring—delivers every song with unparalleled honesty and passion. Her wide-open vision of contemporary Americana roots and soul music showcases the evolution of a passionate artist with an up-to-the-minute musical and lyrical approach.

Shemekia Copeland has performed thousands of gigs at clubs, festivals and concert halls all over the world and has appeared on national television, NPR, and in newspapers, films and magazines. She’s sung with Eric Clapton, Bonnie Raitt, Keith Richards, Carlos Santana, James Cotton and many others. She opened for The Rolling Stones and entertained U.S. troops in Iraq and Kuwait.  Jeff Beck calls her “amazing.” Santana says, “She’s incandescent…a diamond.” In 2012, she performed with B.B. King, Mick Jagger, Buddy Guy, Trombone Shorty, Gary Clark, Jr. and others at the White House for President and Mrs. Obama.

Copeland is a powerhouse,
a superstar…
she can do no wrong.
– ROLLING STONE

Artists and times subject to change.