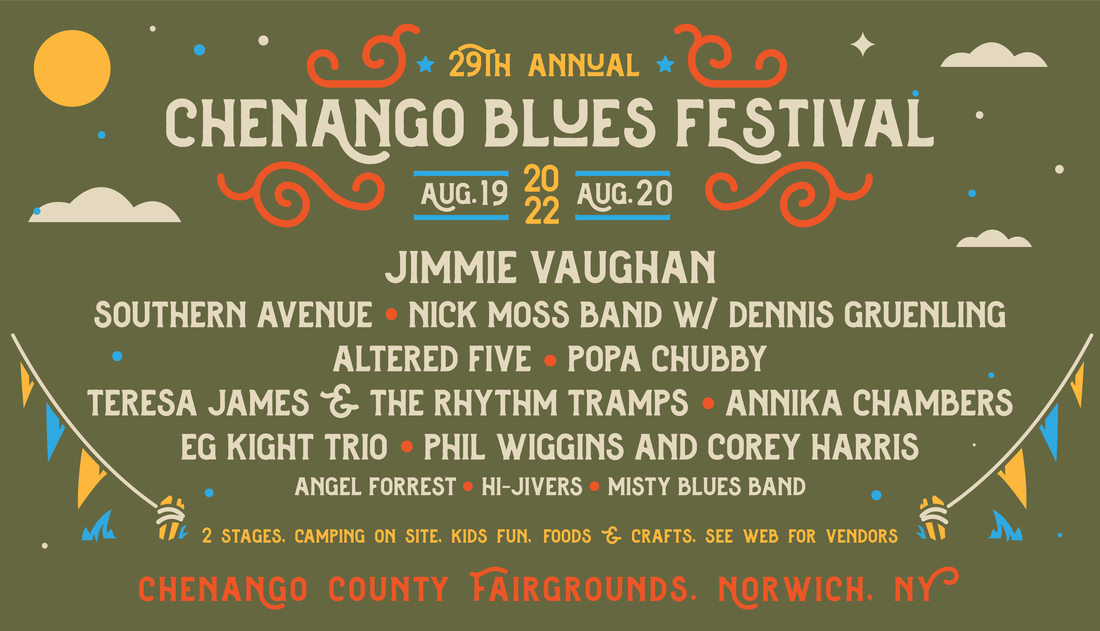 Popa Chubby, born Ted Horowitz, has been hard rocking the blues in his fierce and soulful way for more than 30 years. Over the course of a career that dates back to 1994, he has been a force of to be reckoned with on the guitar, and his tempestuous, soulful playing has never been more powerful. An imposing figure with a shaven head, tattooed arms, a goatee and a performance style he describes as “the Stooges meets Buddy Guy, Motörhead meets Muddy Waters, and Jimi Hendrix meets Robert Johnson," Popa Chubby is an endearing character who is one of the genre’s most popular figures.

In 1988, Angel Forrest began a musical career which would span over three decades – and counting. Her tribute show to the legendary Janis Joplin brought Angel into the public eye. She’s won several awards, including Lys Blues Album of the Year, Songwriter of the year and a nomination for Recording of the Year for her album “Mother Tongue Blues”. The Montreal artist was named Female Vocalist of the Year 7 times by the Toronto Blues Society between 2013 and 2021. The 2018 Memphis International Blues Challenge Finalist sings in the whole country, blues and rock spectrum.

The Hi-Jivers pay tribute to the Rock N' Roll and Rhythm & Blues of the '50s and '60s through their raw, wild originals and passionate covers.  Their greatest influences include Muddy Waters, Howlin' Wolf, Magic Sam, Wynonie Harris, Big Mama Thornton, Johnny Guitar Watson, Little Walter, Chuck Berry and Ike Turner.
Since moving to Nashville in 2014 (Dawna and Austin from Syracuse, NY, and Hank from Seattle, WA) The Hi-Jivers have played extensively in Nashville and beyond, performing at festivals such as Viva Las Vegas Rockabilly Weekender, The  Nashville Boogie Vintage Weekender, and NYS Blues Festival. The band appeared on the cover of Blue Suede News Magazine's Spring 2018 issue, were featured in Vintage Rock Magazine, and appeared on Acme Radio Live in November, 2018.

Jimmie Vaughan
When it comes to the blues today, there are a handful of guiding lights to make sure the music stays true to its powerful source. The sound of pleasure and pain that first sparked musicians to create such a sound is a force that can never be underestimated. The mojo has to be there. For Jimmie Vaughan, he's dedicated his life to making sure the blues not only stays alive, but remains full of life and an inspiration to all who listen. It's a spirit he holds close to him, and for over 50 years of holding the blues close inside him, Vaughan isn't about to stop now.
"Playing what you feel has always been my main goal," Vaughan says. Considering the Texas guitarist and singer has had the kind of career that makes him a living legacy, those are no idle words.

Jimmie Vaughan's new album, BABY, PLEASE COME HOME, is a rolling and righteous celebration of everything the blues can be. The songs can go up, down, sideways and even off in their own distinctive direction, but one thing is certain, each and every one of them is packed with pure feeling and striking originality. That's because while the blues is almost as old as America itself, every time a musician lends their soul to living inside these songs, something new comes out. There is a constant reinvention for musicians like Vaughan, because the blues demands it. There can be nothing less than a revelation, because that's how the music stays alive. It is almost like an alchemy exists, where instruments and voice join together to make a joyful noise. And above all else the blues, in the capable of hands of Vaughan and his musical cohorts, is a path to salvation. One that is birthed in the ability of songs to make life on earth a better place to be.

Blues guitar virtuoso Nick Moss and harmonica wizard Dennis Gruenling have been on a winning streak since they first joined forces in 2016. With relentless nonstop touring and the release of their Alligator Records debut, The High Cost Of Low Living, in 2018, The Nick Moss Band Featuring Dennis Gruenling has been playing for wildly enthusiastic fans and winning over critics and radio programmers worldwide. Debuting at #3 on the Billboard Blues Chart, the album topped many 2018 “Best Of” lists. UK tastemaker magazine Mojo said, “Guitarist and singer Nick Moss shows the world his fearsome guitar chops and his complete familiarity with the great tradition of Chicago blues music. Partnered with harmonica-player Dennis Gruenling, Moss creates a two-headed monster that takes the band thundering through crisp originals.”

Although Moss and Gruenling had known each other for 20 years and had jammed together often, it wasn’t until 2016 that they decided to team up full time. Moss’ expressive and expansive blues guitar playing flawlessly meshes with Gruenling’s monster harmonica chops. On stage, the two communicate seemingly telepathically, as Moss lays down the deepest blues licks and Gruenling’s harmonica wails and howls in perfect response, with Moss’ top-notch band completing the ensemble with their energy and expertise.

Teresa James and the Rhythm Tramps

Keyboardist Teresa James and her band, the Rhythm Tramps, have long reigned as one of Los Angeles’ leading contemporary blues outfits, even though their uncommonly imaginative repertoire, much of it supplied by Terry Wilson, James’ husband, producer, and bassist, is by no means strictly limited to the 12-bar form.  Their 2019 CD Here in Babylon was nominated for a Grammy in the Contemporary Blues Album category.
Soon to have a full dozen albums under their collective belt spanning 23 exciting years, Teresa James & the Rhythm Tramps remain a staple of the Los Angeles-area blues scene in addition to an international touring artist, with a sound all their own.  Moving easily from Texas-style grease and blues into Memphis soul or New Orleans-flavored grooves and all points in between with fun and abandonment, as one critic said, “there are no clichés in this band.”

This hip Milwaukee quintet is known for its strong brew of tough, original blues and hard-hitting live shows. Blues Blast raves that barrel-chested front man Jeff Taylor possesses a “smooth, warm-toned voice as monumental and undeniable as Howlin’ Wolf with the finish and flourish of B.B. King.” Downbeat declares stealth guitarist Jeff Schroedl “reaches the high bar of mixed invention and fluidity.” Fueled by a rhythm section laying down the deepest grooves this side of the MGs, the five blues blasters hit the ground running 20 years ago and show no sign of easing up.

EG Kight Trio
Through the years Kight has developed her own unique sound. Creative Loafing magazine noted that on her new record “Kight is in strong, smooth, controlled voice throughout the record, with dollops of Phoebe Snow, Bonnie Raitt, and even Patsy Cline injected with a dose of Southern charm, class, and a touch of gospel.”

Kight was the epitome of "americana" before there was a genre. And in a world that seemingly needs to put a label on everything, it's clear that Kight's own "country flavored southern fried blues" straddles the line between americana and blues, and gives the listener a hefty dose of the best of both worlds.

Whether on stage or in private life, these two internationally renowned artists are a perfect match! Since meeting in 2018 at the International Blues Challenge in Memphis, Tennessee, renowned Québec bluesman Paul DesLauriers and great American soul and blues singer Annika Chambers have united their artistic destiny to the great joy of those who have had the chance to see them on stage.

Annika Chambers, like so many powerful vocal artists, can trace her love of music back to early childhood. The influence of gospel music is evident in her soul and blues. But it was during her tour of duty in the US Army that her career began. Her colonel, having heard her singing, asked her to sing the Anthem for a ceremony. She was an immediate hit, and from that moment on, she sang at all the ceremonies and then on a support tour for the soldiers in Kosovo and Iraq.

Returning to Houston in 2011 brought the creation of her musical project. Bassist Larry Fulcher (2012 inductee to the Blues Hall of Fame) and producer/musician Richard Cagle of Montrose Records recruited her for her debut album, “Making My Mark”, which climbed blues charts across the US and Europe. This meteoric success brought her the coveted nomination for 2015 BMA (Blues Music Award) “Best New Artist 2015”. She won the Blues Music Award in May 2019 as the Best soul and blues singer in the United States. She is now expanding her touring network in Québec, Canada and Scandinavia.

Corey Harris is a guitarist, vocalist, songwriter and band leader who has carved out his own niche in blues. A powerful singer and accomplished guitarist, he has performed, recorded, and toured with many of the top names in music such as BB King, Taj Mahal, Buddy Guy, R.L.Burnside, Ali Farka Toure, Dave Matthews Band, Tracy Chapman, Olu Dara, Wilco, and others.

In 2003 Harris was a featured artist and narrator of the Martin Scorcese film, “Feel Like Going Home,” which traced the evolution of blues from West Africa to the southern U.S. In 2007, he was awarded a $500,000 MacArthur Fellowship — commonly referred to as a “genius award” — from the John D. and Catherine T. MacArthur Foundation. The annual grant, which recognizes individuals from a wide range of disciplines who show creativity, originality and commitment to continued innovative work, described Harris as an artist who “forges an adventurous path marked by deliberate eclecticism.” That same year, he was also awarded an honorary Doctor of Music degree from Bates College, in Lewiston, Maine.

Cedric Watson is one of the brightest young talents to emerge in Cajun, Creole and Zydeco (Louisiana French) music over the last decade, Cedric Watson is a four-time Grammy-nominated fiddler, singer, accordionist & songwriter with seemingly unlimited potential. With an apparently bottomless repertoire of songs at his fingertips, Cedric plays everything from forgotten Creole melodies and obscure Dennis McGee reels to more modern Cajun and Zydeco songs, even occasionally throwing in a bluegrass fiddle tune or an old string band number.

Unlike many of his contemporaries, he is also a prolific songwriter, writing almost all of his songs on his double row Hohner accordion. Cedric’s songs channel his diverse ancestry (African, French, Native American and Spanish) to create his own brand of sounds. Cedric’s albums are a tapestry of pulsing rhythms and Creole poetry, and his live performances are unforgettable, all at once progressive and nostalgic.

In the summer of 1999 Gina Coleman was performing in the Williamstown Theatre Festival production of A Raisin In The Sun. That production featured the acting of Ruben Santiago Hudson, Viola Davis, Kimberly Elise and Gloria Foster. Coleman was cast as a gospel singer. Nearing the end of the show’s run, Ruben Santiago Hudson gave Coleman a cd collection entitled Men Are Like Streetcars. He told her that her voice was well suited for the blues and urged her to take that next musical direction. Coleman heeded his advance, and after 20 years, Misty Blues has stood the test of time.

Artists and Times Subject to Change